Music at the Baumann

Solatium [sō-ˈlā-shē-əm]
:a thing given to someone as a compensation or consolation.

Join tenor Colin Ainsworth for an exploration of darkness and light in three song cycles. Known for the emotional range and exquisite precision of his performances, Colin will be joined by celebrated violinist Terence Tam and pianist Kimberley-Ann Bartczak.

Including works by Vaughan Williams and Benjamin Britten, the recital will also premiere a new work entitled The Length of a Day with poems by British Columbia’s Michelle Poirier Brown and music by local composer Jeffrey Ryan.

I am continually amazed by the healing power of music, of its ability to heal the soul, helping to cathartically move through situations, to feed one’s heart, not only bringing joy but also help one process and deal with difficult circumstances. For myself, hunkering down at home during the pandemic was an opportunity to delve into music that I might not otherwise had the time to explore. I came across works that shared a common thread – poets who went through emotionally difficult situations of war, famine, plagues, hardship, loss of family, friends and children. I began to wonder…how did they cope and find hope in dark times? And thus, the genesis of Solatium, a way of finding that same hope and comfort in each of our shared human experiences.

The English composer, Vaughan Williams, published Along the Field in 1927 with settings of A.E. Housman’s poetry. The poems had not gained notoriety when it was first published in 1896 until after the war, fueled by young male readers who resonated with the poems. Vaughan Williams, who had served in World War I, arranged the poems with solo violin and voice creating a sparse, mysterious, and yearning quality to the songs. The cycle’s core songs are filled with songs of recollection of happier times, of dancing, but also, of heartbreak. He bookends those with two songs, We’ll to the woods no more and With rue my heart is laden which lament the loss of those happy moments and likening the loss of those friends and recollections to fields of fading roses. 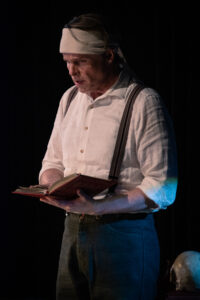 In 1945, a few short months after the end of World War II, Benjamin Britten travelled to Germany to play for the violinist, Yehudi Menuhin, in various recitals – one of them being at the concentration camp at Bergen-Belsen. What he must have seen would have certainly been horrendous, considering the how soon after the war they presented this recital. Shortly thereafter, he began writing music to the words of poet John Donne, whose works he was already familiar with. Britten captures the sentiment of Donne’s conflicting emotions of faith, God, death, and his own mortality with flogging rhythms, quickly shifting harmonies and rhythms, and accented vocal markings as in the songs Batter my heart and Oh, to vex me. Donne and his wife had 12 children, three of which lost their lives before the age of 10, two were stillborn, and with the last child, his wife lost her life. We feel this loss deeply in the Sonnet, Since she whom I loved. In the final poem, Death be not proud, Donne and Britten give us a sense of a reconciliation between Donne and his faith despite all the hardship he has had to endure.

In wrestling with the loss of so many things in this pandemic, I too wanted to reconcile the challenges and difficulties we have experienced with a sense of hope, believing that a phoenix could rise out of the ashes, so to say. Having sung Canadian composer Jeffrey Ryan’s music before, I approached him about the idea of a cycle and the arc I was looking to achieve. On a suggestion from Rebecca Hass, he found wonderful poems of B.C. poet, Michelle Poirier Brown, an Indigenous poet and performer, whose story has been such an inspiration. My desire is that it gives us all a bit of solatium!

Thanks to Timothy Vernon for believing in this project from the onset, the entire incredible Pacific Opera Victoria staff, who made this possible and turned this small seed of an idea into a such a moving project that has exceeded my wildest imagination, Rebecca Hass for all her work and also for introducing us to poet, Michelle Poirier Brown, who I thank for her words, Jeffrey Ryan, who ran with the idea and crafted an incredibly moving cycle, Glynis Leyshon, for her incredible direction, Kimberley-Ann Bartczak for such an incredible partnership on piano, Kinza Tyrrell Schmidt-Paborn for her help in learning these songs, and Robert Milne for planting the initial seed to get this project going.

Colin Ainsworth has been praised for his “exquisite control and emotional directness” and has long distinguished himself internationally as a specialist not only with his interpretations of the major Classical and Baroque tenor roles but also by his performances in contemporary opera. Having traveled the world with his unique and expressive voice, his many performances have included the title roles in Orphée et Euridice, Pygmalion, Castor et Pollux, Roberto Devereux and Albert Herring; Don Ottavio in Don Giovanni, Tamino in Die Zauberflöte, Ernesto in Don Pasquale, Rinuccio in Gianni Schicchi, Fenton in Falstaff, Tonio in La Fille du Régiment, Nadir in Les Pêcheurs de Perles, Pylades in Iphigénie en Tauride, Renaud in Lully’s Armide, Tom Rakewell in The Rake’s Progress, and Lysander in A Midsummer Night’s Dream. An avid supporter of new works, he has appeared in the world premieres of John Estacio’s Lillian Alling at the Vancouver Opera, Stuart MacRae’s The Assassin Tree at the Edinburgh International Festival, Victor Davies’ The Transit of Venus with the Manitoba Opera, and Rufus Wainwright’s Prima Donna at Sadler’s Wells in London and at the Luminato Festival.

Consistently praised for his intense musicality and impressive technique, Canadian violinist Terence Tam has performed in Canada, the USA, Australia, Europe and Japan as a recitalist and chamber musician. Currently concertmaster of the Victoria Symphony, he also previously held this prestigious position with the Adelaide Symphony Orchestra in Australia and Symphony Nova Scotia in Canada.

A native of Montreal, Kimberley-Ann Bartczak is a conductor, pianist and vocal coach. Currently the new Principal Coach and Accompanist at Pacific Opera Victoria, she was the Resident Conductor and Repetiteur at Calgary Opera, was on staff at Opera on the Avalon, an alumna of Vancouver Opera’s Yulanda M. Faris Young Artist Program, and has performed coast to coast across Canada as well as in the United States, Mexico and Europe.

Poet, The Length of a Day | Michelle Poirier Brown

Michelle Poirier Brown is an internationally published poet, performer, and photographer. She is nêhiyaw-iskwêw and a citizen of the Métis Nation. Her poem “Wake” won PRISM international’s Earle Birney Prize in 2019. Other poetry has appeared in Arc, CV2, Emrys Journal, The Greensboro Review, Grain, Plenitude, Right Hand Pointing, Vallum, and several anthologies, including Sweet Water: Poems for the Watershed. Michelle’s debut book, You Might Be Sorry You Read This: poetic memoir, is forthcoming in 2022 by University of Alberta Press in the Robert Kroetsch Series. A feminist activist and retired federal treaty negotiator, Michelle now writes full-time.

Composer, The Length of a Day | Jeffrey Ryan

Praised for his “strong personal voice” (Globe and Mail), “masterful command of instrumental colour” (Georgia Straight) and “superb attention to rhythm” (Audio Ideas Guide), and recipient of SOCAN’s Jan V. Matejcek New Classical Music Award, Vancouver-based Jeffrey Ryan takes inspiration from the world around him and creates music running the gamut from orchestral and chamber works to opera, art song, and choral music. With awards and recognition including four JUNO nominations, his music has been commissioned, performed and recorded by orchestras, ensembles and soloists worldwide, including his award-winning portrait CD Fugitive Colours with the Vancouver Symphony and the Gryphon Trio. jeffreyryan.com

The Length of a Day, a song-cycle for tenor and piano with poems by Michelle Poirier Brown and music by Jeffrey Ryan, was commissioned by Pacific Opera Victoria for Colin Ainsworth and receives its World Premiere via online stream from The Baumann Centre in Victoria, British Columbia, Canada, on April 16, 2021.

Pacific Opera Victoria is able to offer performances thanks to the thoughtful support of our donors.

If you are able, we hope that you will consider making a 'pay-what-you-can' donation towards this recital: Donate online by clicking here, and thank you for supporting our digital programs.

Join composer Jeffrey Ryan and poet Michelle Poirier Brown in Episode 17 of the Listening Party Podcast as they take you on a journey from commission to premiere of their new work The Length of a Day, which premieres in Solatium!

Check back often as we continue to share with you more 2020/21 ReImagined Projects including new operas created for the small screen, engaging programming for youth and families, and chamber performances for small audiences streamed online from the Baumann Centre.

Learn about the works with Colin!

Vaughan Williams' Along the Field: We'll to the woods no more

Vaughan Williams' Along the Field: Good-bye

Britten's Holy Sonnets of John Donne: Since she whom I loved

Britten’s Holy Sonnets of John Donne: Death be not proud

Michelle Poirier Brown & Jeffrey Ryan's The Length of a Day