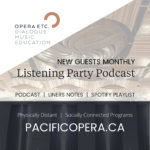 Friday, May 1, 2020 | 1 pm | On Demand
Rebecca interviews three artists who are staying boldly creative in these strange times … all while really missing their audiences. It’s not the applause they miss, so much as the energy in the room, the sense of conversation. But this intrepid group, like many artists, are carrying on, doing their art, navigating the technology, singing and playing to unheard, invisible, distant audiences.These artists are also realizing that technology will never replace being in the room together. We can’t live without one another. But we can share these artists’ chosen musical musical moments in the latest Listening Party Playlist. 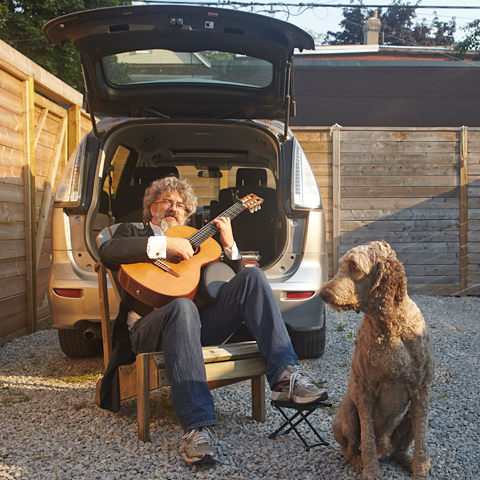 Renaissance Man Doug MacNaughton (he’s an operatic baritone, multi-instrumentalist, teacher, songwriter, ex-TTC-Subway musician) speaks to Rebecca from his 2010 Mazda 5, which goes by the name of Rocinante (after Don Quixote’s horse). These days Doug is tilting at the windmill of social distancing by holding Car Concerts, using his voice, guitar, his own compositions, and his quixotic venue. It takes Carpool Karaoke to a whole new level.

Doug has performed numerous times with Pacific Opera, beginning as Taddeo in L’Italiana in Algeri in 1997. He subsequently returned as Dr. Downie in Erewhon, Hortensio in The Taming of the Shrew, Trinculo in The Tempest, and Benjamin Hubbard in the Canadian première of Marc Blitzstein’s Regina. In 2010 he made his role debut as the Major Domo in Pacific Opera’s Canadian stage premiére of Richard Strauss’s Capriccio, returning as Alfonso in Così fan tutte, Benoit and Alcindoro in La bohème, and Donner in Das Rheingold.

Photo: Doug MacNaughton with guitar, car, and dog. It’s the cover of his 2014 CD Guitarias

Doug sent us a short video of one of his Car Concerts. Here he is singing “Take a Chance.”

Doug also sent us a link to a video in which alumni of productions of Les Miserables from 1987 to the present share an anthem of hope. Among them is Doug, who played Enjolras in the Canadian company of Les Miz. He pops onto the screen at 1:18. Watch on Youtube. 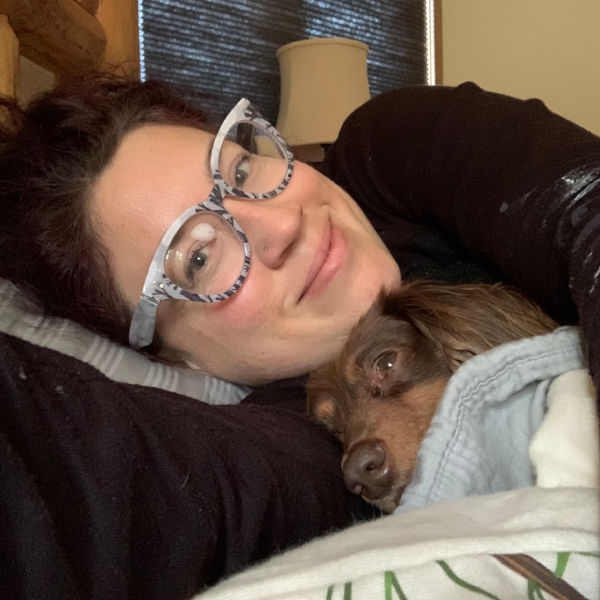 Pianist and coach Kinza Tyrrell speaks about navigating the perils of online technology with her new offering, Karaoke with Kinza.
How can you be a collaborative pianist when you can’t collaborate in the same room? Instead Kinza pre-records the piano part for a singer to later add the vocals. But she definitely misses that electric, improvisatory communication between singer and pianist that makes live performance so invigorating.

Victoria native Kinza Tyrrell is the Principle Répétiteur and Music Director of Vancouver Opera in Schools at Vancouver Opera.
Kinza is also Music Director for The Flight of the Hummingbird, a new 45-minute opera for young audiences, which will be broadcast in its entirety on May 19, 2020.
Full bio

Here’s a lovely selection of Karaoke with Kinza, featuring tenor Joé Lampron-Dandonneau, who has sung with the Pacific Opera Chorus and played Parpignol in our 2018 La bohème 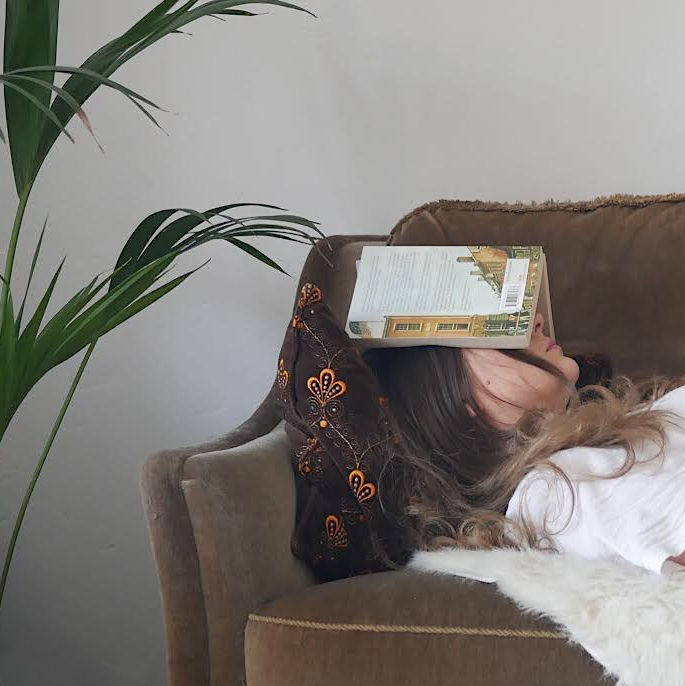 Victoria born singer-pianist Rachel Fenlon speaks to Rebecca from a farmhouse outside Berlin. Rachel is taking requests from the public and learning, performing, and posting a new song every day on her Instagram account! It’s an amazing way to force herself to use this unplanned and scary downtime to learn new repertoire while connecting with others!

Rachel debuted with Pacific Opera Victoria in 2013 as Nannetta in Falstaff, and the following year returned as Queen Guenevere in Camelot in concert. She is a rising operatic soloist and chamber musician and is committed to performing, curating, and commissioning contemporary music. Rachel performed in concert at Pacific Opera’s Bauman Centre in January, and she will be the first artist in our new online version of Lunchbox Opera, launching May 22 at 1 pm.
Full Bio
Rachel Fenlon on Instagram

What you hear on the podcast is just some of the conversations I have with my guests. The Listening Party Playlist liner notes reflect the fuller conversation.

Knowing Doug and his eclectic music-making palate and ears, I have been really looking forward to his list. He was crestfallen when I told him he was allowed only ten songs. But I think he chose ten great ones with lots of ear candy. There is a bonus track: in the podcast, Doug tries to sing part of a Stephen Fearing song as we discussed creativity in these times. That song, called “Carousel” is also in the playlist.Here are Doug’s notes:

Kinza has a binder called “Songs I want to sing and play”. It’s filled with songs she has discovered while playing for others and that she wants to sing and play for her own pleasure. This illustrates again to me that Kinza is a music maker, more than a music listener.

When I asked her about her Spotify picks, she told me that my email request for this had caused her to panic. Music doesn’t exist in the background for her. When she hears music, she automatically analyses it. She explained that she immediately thinks about the key it is in. Then she wonders if it is a key she likes. The dialogue goes like this Oh, that’s in F major…I love F major…yeah…. if it was in E it would be too bright. I don’t know about you, but this isn’t what I think about when I hear a piece of music.

It makes sense, that as a musician, Kinza listens to music in a different way than most. To enjoy music as background, she tends to turn to music that her classical musician ear isn’t tempted to assess or pick apart. Because she works with singers, she finds that music without a vocal line is best for pleasure listening. She turns to Bach, particularly contrapuntal work, and jazz. For the playlist, she shared music that she’d loved when she was younger. Her list includes music from her very early childhood up into her teenage years.

These notes are my transcriptions of our conversation.

As I was transcribing these notes from our conversation, it became so clear to me why Kinza doesn’t listen to classical music in the background. Music imprints deeply for Kinza and carries so many images, memories and feelings. No wonder she is such a wonderful musician to work with, and to experience in performance.

Rachel sent me her Spotify list and it was HUGE! Too much for me to share, and she kindly trimmed it down and provided these notes about her choices.

Another great week of music selections. Listen and enjoy!