Live at the Baumann

Take a trip back in time with Megan Latham by peeking in on the antics of 1920’s New York City café society (The Italian Lesson), and 1950’s Boston for an unforgettable visit to Julia Child’s kitchen (Bon Appétit)! A show stopping night of live music, Dante’s Inferno, and chocolate cake!

Filmed for enjoyment from home in 2021, Pacific Opera is pleased to be bringing you The Italian Lesson and Bon Appétit! live and in person at the Baumann Centre!

For the Comfort of Artists and Audiences:

Masks are required when entering/exiting the Baumann Centre, and recommended while seated at Bon Appétit! and The Italian Lesson.

Proof of Vaccination is required for all events at the Baumann Centre.

Ticket returns are available until the morning of any given performance or screening.

Dante’s Inferno can be Hell. 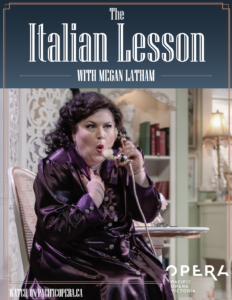 Like a freshly popped bottle of champagne at brunch, The Italian Lesson sparkles with sunlight. Hilariously frenzied and bouncing melodies are supported by pianist Kimberley-Ann Bartczak, as mischievous children, silent servants, gossipy acquaintances, and a new puppy weave in and out of our pretentious matron’s doomed Italian lesson.

An iridescently irreverent musical experience for all ages.

The original flamboyant foodie teaches you to make a decadent chocolate cake in a cooking lesson that’s also a laugh out loud opera! 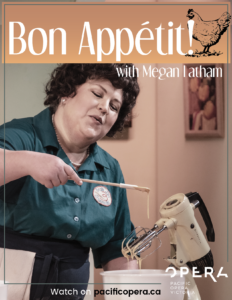 Based on two real-life episodes of the iconic black & white television sensation, modern audiences will relish the nostalgia of the 1950’s style kitchen and the bubbly characteristics of Julia Child. Meet or remember one of North America’s best-loved television personalities.

Seasoned with antics and drizzled with wit, Bon Appétit! is a deliciously uplifting delight for epicureans of all ages.

Get excited for the show by trying to recreate Julia Child’s chocolate cake recipe yourself! 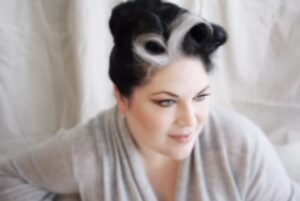 Megan Latham made her Pacific Opera Victoria debut as Eduige in the 2010 production of Handel’s Rodelinda, with return appearances as Mistress Quickly in Verdi’s Falstaff, Third Lady in Mozart’s The Magic Flute, and Flora in Verdi’s La traviata. In 2019 she took on three roles in Puccini’s Il trittico: La Frugola in Il tabarro, the Princess in Suor Angelica, and Zita in Gianni Schicchi.

We’ve spent the past two years learning to transform live performance to digital, but what is it like to transform a work originally conceptualized for the camera into a live performance? Find out with Robert Holliston, Curator of Public Engagement, as he chats with conductor Giuseppe (Joey) Pietraroia and pianist Kimberley-Ann Bartczak about the double-bill performance of Lee Hoiby’s The Italian Lesson and Bon Appétit!

An unexpected pandemic delight has been my introduction to two delicious chamber operas by the fine American composer Lee Hoiby – Bon Appétit! and The Italian Lesson. I was, of course, familiar with Hoiby’s operatic setting of The Tempest (produced by Pacific Opera several seasons ago) but these two chamber works were new to me. And I was immediately captivated by their joyful celebration of two very different female characters. Utterly charming, unabashedly celebratory, Hoiby offers us two musical monologues that engage us immediately with their playful theatrically and extraordinary masterful musical settings. Most significantly for me, he also manages to capture the distinctive rhythms of two complex texts.

Bon Appétit! is based on two episodes from Julia Child’s iconic PBS cooking show – The French Chef. Hoiby, with uncanny skill, has captured perfectly the beloved sound of Julia’s swooping voice. Julia Child is indeed a force of nature and she never lets a little disappointment like losing a race with a mixing machine stand in her way. Cooking with Julia is fun…. and who wouldn’t want a piece of her delicious soufflé-like Le Gâteau au Chocolat l’Éminence Brune?!

The Italian Lesson, which features a satirical look at 1940’s New York Café Society in the person of the redoubtable Mrs. Clancy, is in fact Hoiby’s love letter to American monologist and performer Ruth Draper. Not widely known today, Ruth Draper was a pioneer in the art form of the one person monologue. Artists as distinct as Lily Tomlin and Laurence Olivier celebrate her place as a theatrical pioneer. Now, thanks to Hoiby, a whole new audience has a chance to delight in Draper’s sharp eye, satirical wit, and dazzling ability to fill an empty stage with a bustling cast of supporting characters, including a golf playing husband, a hoard of naughty children, and a long suffering Italian teacher.

This production has been singularly blessed to have as both Julia and Mrs. Clancy, the gifted Canadian mezzo soprano Megan Latham. Megan’s theatrical sensitivity and rich musicality give us two astonishingly well realized characters – she climbs this operatic Everest with deceptive ease. And as always, these performances reflect the passion and care of the entire Pacific Opera Production Team and Creative Team – Conductor Joey Pietraroia, Kimberley-Ann Bartczak (Répétiteur), Pam Johnson (Set and Costume Designer), Jeff Harrison (Lighting Designer)… grazie mille.

These are operas intended to entertain… no one commits suicide, dies for love, or succumbs to spiritual ennui. Instead, for both these Hoiby women, the world is indeed their stage and they stride across the boards with gusto and enormous energy. Please Enjoy! 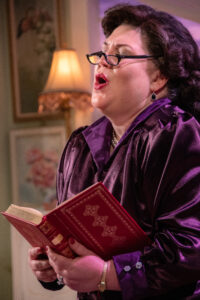 The Italian Lesson
Ruth Draper, who knew Henry James and Edith Wharton, and/but was worshiped by Lily Tomlin and a host of theatre folk in between, has faded from memory largely because the art she invented and mastered was unique. Alone onstage, with at most a chair and a table, she conjured a whole cast of characters in her brilliant ‘monodramas’. She wrote them herself. Meticulously crafted, but brimming with the surprises of even everyday events, her scenes shine a bright light on aspects of the human; while never cruel, she is unsparing of pretention and pettiness. She can paint a vivid portrait in a few lines; she can also evoke, often elliptically, the emotional chasms within.

Her sense of ‘type’ was delectably accurate, never more so than in The Italian Lesson. Here we meet a prosperously married New York club-woman at home in her spacious 1920s downtown apartment, complete with maid, cook, and footman. Reading Dante is a laudable undertaking, here undercut by a sense that the snob appeal – the desire to demonstrate ‘culture’ – outweighs real, sustained interest. Hoiby’s setting has special challenges for the singer, first and foremost a wide range of vocal delivery, from fully sung, to half-sung to completely spoken.

The lesson does not go smoothly. Hoiby has made a structural division of the piece into nine continuous scenes, each determined by a different disruption; phone calls are exchanged, children come and go (the baby gets stuck in the waste basket), a new puppy is ushered in, servants (cook, maid) and personal help (manicurist, secretary) arrive in the midst; about two-thirds through, Mrs. Clancy gives up on Dante as if acknowledging that he is not a spontaneous priority. Letting the Signorina go, Mrs. Clancy continues to manage an absurdly crammed schedule for the rest of her day, until a call from her lover gives us a chance to see her in a brief moment of erotic memory free of the frantic need to push on through a mad rush of appointments before instantly resuming. Hoiby’s unobtrusive genius discovers a constant flux of atmosphere; he characterizes each scene with a specific melodic profile, not creating a series of arias, but rather strewing occasional arioso passages throughout, surrounding the voice with a range of colours and moods. The Italian Lesson is a work of great and somewhat wistful charm as we remember more innocent days and the pursuits of high society in America’s great metropolis.

Bon Appétit!
It should not surprise anyone familiar with Lee Hoiby’s magnificent and varied operas and other vocal compositions that he’d find inspiration in the great and often gloriously goofy television program by which the older Julia Child became a virtual cult figure.

She combined spontaneous gusto with deep and precise knowledge of all things gustatory, a certainty which added a winning slap to her dash. She made cooking a performance art well in advance of the vogue. You knew she was firmly in control of the essentials, but found yourself wondering what might happen next anyway.

The infectious and sometimes almost defiant delight Julia Child took in demonstrating her chosen dishes must have been irresistible to Hoiby, whose sense of humour was keen. His own quick but gentle wit made him a natural musical partner for Ms. Child; her unique speech timbre and rhythm offered ongoing inspiration for the shape of musical phrases and a timing often close to classic comedy.

Hoiby reflects in tones the events in the kitchen – impossible to miss the whirling strings as the instant coffee meets hot water, or the ‘smear motif’ as the pans are buttered, or the heralding, by a phrase from America the Beautiful, of two United States Grade A large eggs. Julia compares the delicate cake to a souffle and Hoiby lets us ‘hear’ one in a gently rising harp glissando. She tells us she has a little pan “for the drippies”; it’s impossible not to hear in that diminutive an affection even for the accidental by-products of baking. There is only one really loud marking in the score; it occurs when Julia, about to add the melted chocolate to the egg whites, drops the pan.

Julia can sound at once gnomically profound, and slyly witty: “Chocolate”, she observes, “is much more complex than any of us suspect.” To my ear, that’s almost Wildean. Perhaps the essence of great wisdom is simplicity, at least on the surface. It took me a moment to recognize a lifetime – a famous lifetime – of every experience one can have in the kitchen contained in Julia Child’s dictum – a part of this work’s libretto: 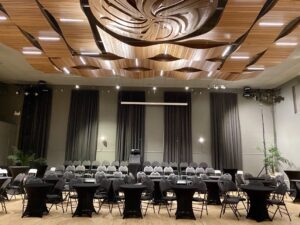 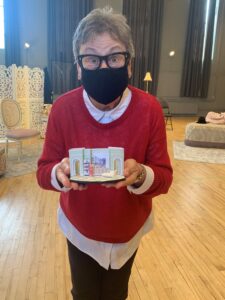