A story we know. A woman we must remember

ON TOUR NOVEMBER 2019 to Victoria, Regina, & Prince George
A new chamber opera by Métis playwright Marie Clements and Juno-winning composer Brian Current, Missing gives voice, in English and Gitksan, to the stories of missing and murdered Indigenous women. Set in Vancouver’s Downtown Eastside and along the Highway of Tears, Missing is a poetic expression of loss and hope.

Missing is an extraordinarily moving and thought-provoking work… a magnificent mélange of singing, acting and music that, one hopes, will be seen by audiences across Canada and the world. – The Whole Note

Co-commissioned and co-produced by Pacific Opera Victoria and City Opera Vancouver, the opera, developed over two and a half years, had its world première in Vancouver and Victoria in November 2017. 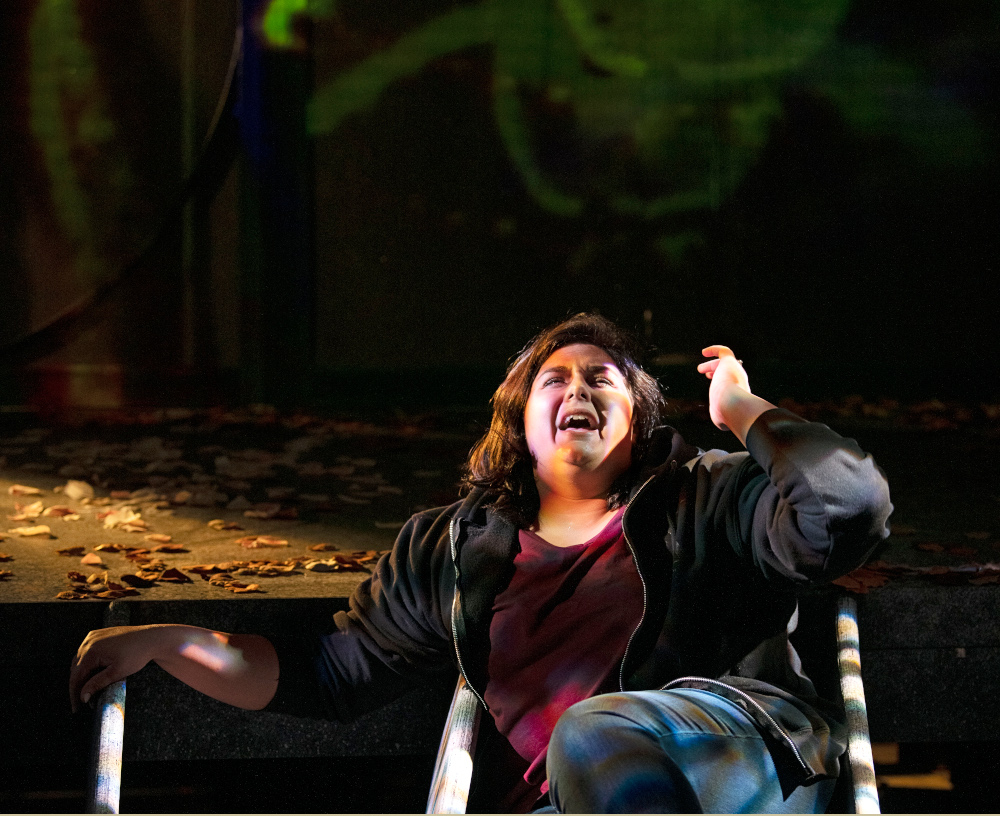 Above: Scenes from the 2019 remount of Missing for performances in Victoria, Regina, and Prince George

Above: Scenes from the 2017 world première production of Missing

Media from the 2019 touring production…

In Regina, Missing is a heart-wrenching, vital story of MMIWG

Review of Missing by Ashley Martin for the Regina Leader-Post

In an opera, you expect the performers to be singing the entire time.
But there’s a scene in Missing wherein Rose-Ellen Nichols just weeps.
Weep isn’t a strong enough word. She’s in anguish.
She portrays a character simply called Native Mother. Her daughter has gone missing on British Columbia’s Highway 16, the Highway of Tears…
Later, the missing girl’s brother (Kyle Lehmann) corrects a stereotype. “My sister was on her way home from school,” he sings. “She was going to go to law school to be a lawyer. She had plans. She wanted a family. She wanted to live. She wanted to love. She wanted what every human being wants.”
…Before Friday night’s show, there was acknowledgment of the family members in the audience, survivors whose loved ones are among the many missing and murdered Indigenous women and girls in Canada.

Review from Check the Program

It’s rare that a new opera can achieve that delicate balance between being both timely and timeless — the former commenting on the world around us, while the latter offers material that will still be relevant for future audiences, regardless of when it is performed
… this powerful, moving and compelling production should be required viewing for any contemporary Canadian audience…
“Missing” is ideally suited for opera, which so often focuses on high tragedy and death, and is often performed in other languages, making the English and Gitskan libretto with surtitles here neither foreign or difficult to follow.

Regina expat Molloy reflects on ‘Missing’ and the truth it conveys

Marie Clements … focused on two young women, one Indigenous and one non-Indigenous … She wanted to send a message of “our responsibility in making it possible that all young women have a chance to live a life and follow their plans and their dreams…”
Focusing on individual characters is “a great place to start having these conversations,” said Molloy. Each missing or murdered woman is a person with a story, “rather than these huge, horrible statistics…”

Marion Newman has worked for two decades on projects that were artistically challenging … But few have matched the spiritual satisfaction of her two-year involvement with Missing, the critically lauded chamber opera by Métis librettist Marie Clements and composer Brian Current….
Missing will have resonance for decades to come, and Newman hopes it will provide some healing to families of missing and murdered women.
“When we hear someone singing to us, I think it just resonates differently in our bones than reading a story does, or seeing news bits on television. We absorb that story so fully that I think it makes us have to process it more deeply. And in that way, I think art can make change, because it changes us.”

“Probably [Missing is] one of the operas that I think is the most important to be happening again and again and again,” says Newman. “I am thrilled to be part of it.”
…“These are our mothers, sisters, our aunts, our friends, and they matter,” she says. “They deserve to be looked for, to be protected…
The provincial government introducing legislation to implement the United Nations Declaration on the Rights of Indigenous Peoples … would make Dr. Wilson, who Newman performs … have … hope.

Media from the 2017 World Première…

2016 CBC Radio Interview with Marie Clements
Marie Clements talks about the issue of Missing and Murdered Indigenous Women, and how opera can accomplish something new in telling this very human story. A 2016 interview on CBC’s Early Edition, before the opera was written.

This touring production is made possible by the extraordinary support of the following:

Pacific Opera is also profoundly grateful for the confidence, faith, and vision of funders who supported the commission and the 2017 world première of Missing, including the Vancouver Foundation; the Canada Council for the Arts’ New Chapter Program; Creative BC and the Province of British Columbia; the Community Fund for Canada’s 150th, the Victoria Foundation, the Koerner Foundation, and an anonymous Foundation.

Our work takes place on the traditional lands of the Lekwungen speaking people, now known as the Songhees and Esquimalt Nations.